VIP
Legacy
As of today (I think) it's been 5 years since I first played on SGM. I only played for a month and never joined the forums, but still. If you had told me in 2016 that in 5 years I would be a moderator on its legacy/spawn community and have over 3k hours in Gmod I would have said something like "nah fuck off I'll have a girlfriend by then" (lol).

So I want to thank you all for being the girlfriend I could never have with a giveaway of 40 000 f3 shop points because I don't have VIP and can't buy any models anyway. Just react to this post before Wednesday, August 11 at like 9PM-ish Saskatchewan time and I'll pick the winner randomly

Have a good day 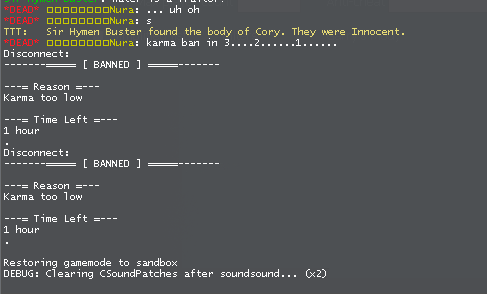 VIP
Legacy
Not sure how we getting said points, but still gonna ask pleaseee, cherry on top and all that happy stuff

wubby said:
How are you going to give the points
Click to expand...

Shit can you not send points yet? In that case this giveaway may not end for a while

Moleman said:
Shit can you not send points yet? In that case this giveaway may not end for a while
Click to expand...

I don't think so.

VIP
Legacy
Okay well I'll extend the deadline to Friday aaaaaand I guess the winner will collect the points when that feature is enabled?

"I'll be seeing you on the forums."

Moleman said:
Okay well I'll extend the deadline to Friday aaaaaand I guess the winner will collect the points when that feature is enabled?
Click to expand...

@My Dime Is Up , you hear that? You have till this Friday to add the ability for players to send points to each other. You got that, bub? You better not disappoint me. You don't want to know what will happen as a result if you disappoint.

So get on it, code-bitch.

...
<3
Ayo, this is my signature and it is better than yours.
#TMODLIVESMATTER
#ModsWhoDontWearFedoras
Got Gamer Gunk?

Legacy
What is girlfriend?

sig removed at request of opps

VIP
Legacy
And the winner is...

Thanks for participating in my heavily rigged giveaway

rigged how didnt i win

so how do you even give points?