Your IGN
gilbert​
Your SteamID
STEAM_0:0:55286968​
Server
TTT Modded​
Why you should be unbanned
I deserve to be unbanned because I don't think I did anything wrong. I was being wrongfully slayed for a report that was forgiven, and decided to retaliate by rdming the staff who slayed me. I should've been slayed for that instead of being banned.​

VIP
Legacy
You were banned by @Titan, please be patient for his response.

I'd like to note though, you have history of toxic behavior on the server before.

You, as my friend Lunar has helpfully pointed out, have a relatively extensive history of toxic behavior on our servers, particularly given the short-livedness of our actual servers. On at least three separate times it's been made known that you tend towards being toxic when playing.

You blatantly RDM'd Prozakk at the beginning of the round on the first round. He reported you, and you didn't say anything besides confirming that it was just blatant RDM. Even though Prozakk forgave the report, Bonks still felt (and I agree) that an additional slay for toxicity was warranted, given the toxic nature of the kill. He wasn't even slaying you for the RDM, just the toxicity. You didn't like this though, and so you chose to target bonks and RDM him the following round because he wouldn't remove the slay from you.

That's how kids react man. Just take your lumps, the server's not going to be fun when you play like a jerk. 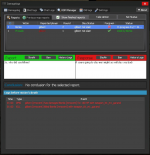