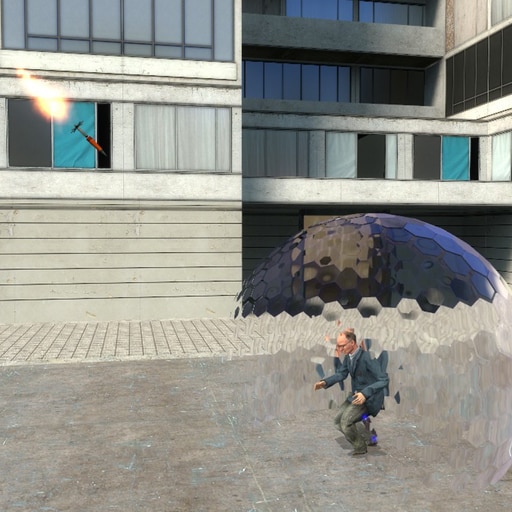 You throw down your hex activation grenade and a circular shield forms where it was thrown, lasts about ~10 sec, maybe less. Was a very underrated detective weapon on SGM that no one ever used because it wasn't around for long enough for people to get used to it and actually strategically use it.

Before you argue that this is too OP, it really isn't. Ya it can absorb any damage, from shielding you from a storm of bullets to protecting you from a C4 that you are right next to. But when this was on SGM, it was never even commonly used. And the only time I've ever seen it used was in one of those 4 main scenarios above^. Those scenarios don't happen very often anyway, so it's not like the hex shield will be usable every round. You won't always have a hex shield ready in hand, but on the occasion that you do, it can be quite useful. If anything, it helps nerf already OP traitor weapons, such as C4 and gauss rifles. Oh, and jihads too.

Original implementation in SGM --> https://www.seriousgmod.com/threads/the-silencer-the-hex-shield-new.37500/
Last edited: May 28, 2021
Upvote 18 Downvote
Voting on this suggestion has been paused.

sig removed at request of opps

VIP
Legacy
Please, I honestly miss this thing so much

VIP
Legacy
I fucking love this addon. I wasn't aware we ever had it on SGM and I'd love to try it out

Panda With a Gun

Legacy
This and the silencer

Legacy
+1 I've never used it, but I definitely would

VIP
Legacy
Yo I remember doing some funny shit with this fucker back in the day, once stopped a harpoon mid air with it, picked it up and threw it back
Tenures:
#DarkOrder 18-06-21 to 21-07-21 (Demoted)

If its from sgm do it detectives need more stuff