If we are going to change the chat in AHG TTT can we at least make it scale?

Heres a pic of what my chat looks like. Having trouble reading it without going full screen? Yeah me too. I'm on a 4k monitor (not a brag) and I feel like I have to squint to see this.

@BARTHOLOMEW has expressed similar complaints for whatever resolution his monitor is.

@My Dime Is Up I know you said this one is supposedly better because of !p messages or something, but its not better if I have to crane my neck to the side and squint to read chat imo.

VIP
Legacy
@Captain K9 has also asked for this to be reversed, or have the option to.

Legacy
dont use a 4k monitor

VIP
Legacy
The chat hurts my eyes, it needs to be made more opaque, or reverted, idk, maybe im just used to the old system, but the new one feels clunky as hell, copying is now made more complicated too as you can no longer mouse over the text and have to right click and idk, it just looks and feels bad.
Tenures:
#DarkOrder 18-06-21 to 21-07-21 (Demoted)

Developer
Moderator
VIP
Legacy
If you post an image of chat please state the resolution you're running GMod at so I can properly scale it.
L

Legacy
I’m an advocate for leaving the chat box vanilla. I have yet to see a functional modded chat box that works correctly on high resolution displays. Even my 1440p monitor struggles to work correctly with a custom chat box.

Perhaps make the modded chat box optional, maybe adding a tick box in the F1 settings? Could even do this for the custom head. Probably wouldn’t be difficult to implement either!

I agree with Sticky Bandit. The OG text box is fine, the new ones always leave something to be desired or are nonfunctional.

Developer
Moderator
VIP
Legacy
This text box leaves a lot to be desired actually. This text box allows us to do much more now and integrate it better with our systems. The functionality is implemented, it just needs to be used after we fix these small bugs.

VIP
Legacy
How do you play with 4k? When I tried anything higher than 1080 the UI did not scale properly, making everything awfully small.

VIP
Legacy
Tbh I have just gotten use to it. Just had to get use to looking lower left for chat, other than that the UI never bugged me. Played for years on 2k, 4k wasn't a big jump. However, this new chat makes it EVEN SMALLER. Also, when I lower my resolution to anything past 4k, it makes my game screen be a window on my screen. There's probably a way to fix that but the artifacts and other crap I get from it just makes it not worth it to me.

But this isn't just because hurr durr my 4k doesn't scale right on a game from the early otts. The new chat is harder to copy, you can't just grab someones steam ID or copy their name (unless there is a new way to do it that I dont know of). When you type !p All- and use tab to fill in someone's name the tab seems to bring your cursor all the way back to the start of the message for some dumb reason. And with all of that, I definitely don't like the style much less the scale.
Last edited: Jul 13, 2021

Developer
Moderator
VIP
Legacy
Problem with GMod is the way UIs are done, it is unbelievably hard to make things scale properly. I tried my best with the HUD so I'll do my best with the chat

Pros- Its work in progress and does something Dime wanted.

Cons- Its scaled horrible, when we could just have regular chat that is more readable.
People have been coming in for the last few hours and saying "The hell did they do to chat why did they make it terrible". Multiple people have expressed this exact thing.
People have been complaining of the color scheme giving them a headache to look at, or just being unfriendly on the eyes.
It removes functionality that was already in place with the old chat.


Dime I know you're putting in significant effort for this and I am not trying to put you down or anything. I just think this chat version may have missed the mark. If there was an option to just use the vanilla version, I would be 10/10 satisfied. 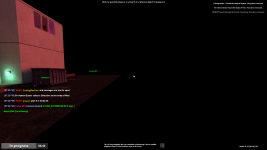 I'm sure this was already known but 1920 x 1080 looks fine, if not a little big. I'd rather see more messages closer together than like 5 messages that are further apart tho.
"Unimaginably dystopian mindset this poster child of depression Christ almighty. This is why I wanna get into animation. To show how wrong morons like these are" -Unknown​
L

Legacy
Ok, so here's a comparison between the two chatboxes and how they appear on my 2k (2560x1440) monitor. The AHG chatbox, to me, is hardly legible. It is full of white space between each message, and is quite buggy.

What is the point of this aftermarket chat box? Where does the vanilla one fail to meet the needs of After Hours Gaming?

Why are we focused on adding a feature like a brand new chat box, instead of fixing and completing existing features, like the HUD which still has missing features, or other bugs related to weapons? While I am glad to see the Dual Berettas fixed, other scoped weapons are still broken. There are legitimate, functionally broken things I think should be resolved before implementing new features, which are also functionally defunct, into the game.

I understand that many people often complain about new features, like every single League of Legends update, or every new Discord update. Everyone complains about change. However, this goes way beyond that. This is not merely a stylistic change - this is a functionally inferior version of a chat box. 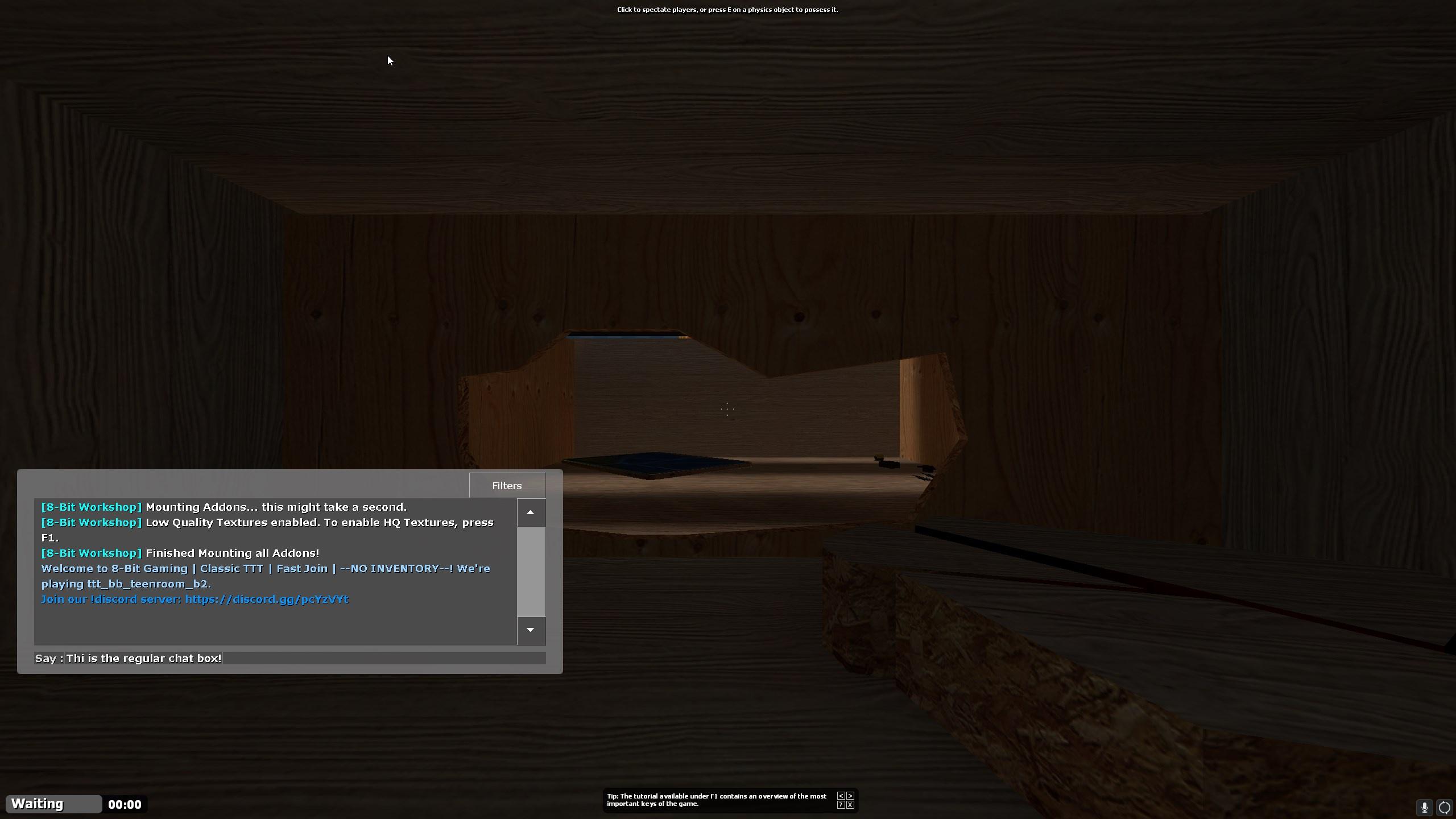 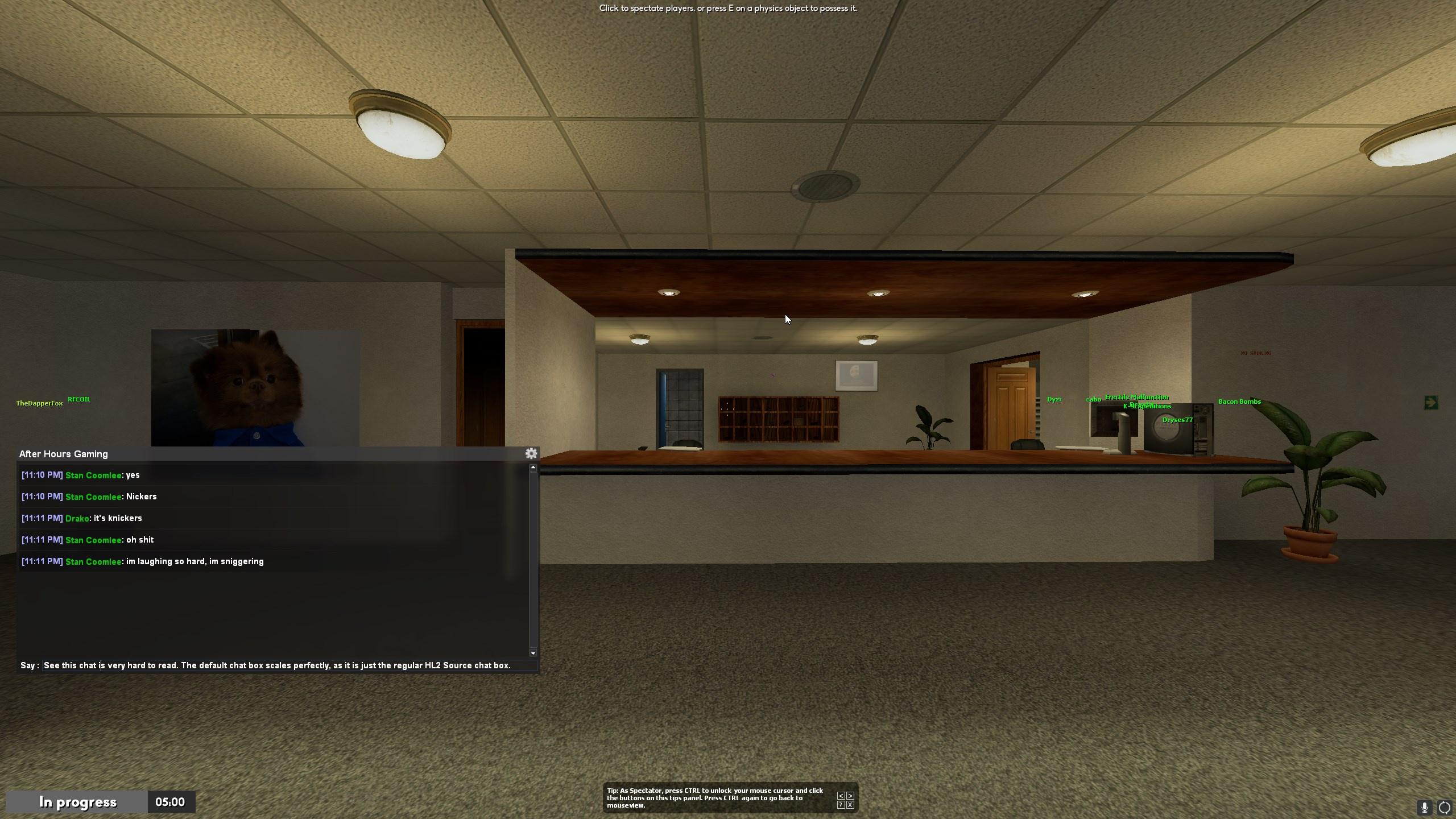 Please consider removing this chat box until such time where it is well polished, bug free, and is heavily tested before continuing. Perhaps consider adding a new role, like beta tester, where people like me can help test new items like this, so we can have fully polished content getting added into the game instead of an old rusted out 1980s Toyota Corolla.

EDIT: I've found more bugs with this, and other not really bugs more just oversights? So, whenever you have the chat box open, the little thing that shows the mic level when people talk goes away. Also, this shit is fucking damn near impossible to read on light backgrounds as messages appear lol

Developer
Moderator
VIP
Legacy
We do not want to have discrepancies between two separately run systems. Currently I am removing the chatbox until I refine it more. To me, on my screen, it looked and performed fine. Obviously with many people on different systems, it has exposed some bugs. It will be temporarily removed but the new chatbox will return in the future (sooner or later I can't say)

When the chatbox is fully refined, we will be stick to a new system that allows for links, previous message linking, the ability to use up and down arrows to cycle through previous chat box inputs, and various staff tools directly implemented into the chatbox. We will not allow for the option to switch to the built-in chatbox. Unless there are significant bugs or exploits in the future, we will use the new chatbox.


Sticky Bandit said:
I've found more bugs with this, and other not really bugs more just oversights? So, whenever you have the chat box open, the little thing that shows the mic level when people talk goes away
Click to expand...

This same bug existed on the previous chatbox and the chatbox isn't even the cause of the mic level not showing. Whenever your cursor is visible, the mic level will not be drawn. This is a bug I attempted to fix but caused everyone's cursor to rapidly flicker, so I reverted it.