Rejected Reduce the amount of C4s able to be bought

Banned
VIP
Legacy
Ok ill be honest i place probably 3-6 C4s each T round i have, so i would love to see a limit of 2 C4s per T.
Upvote -11 Downvote
Voting on this suggestion has been paused.

Legacy
this would make the game unfair
tTt, tunight.

Legacy
This is dumb lol!

Supporter
If you spend more than 2 credits on C4 you're meme-ing and its hilarious. (says the guy who once put 8 c4 up at one time) 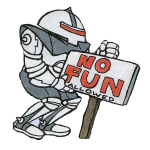 VIP
Legacy
So I read the username wrong, sorry Mew- But yep, it's nice to just raise hell on clue
Last edited: Jul 24, 2021

VIP
Legacy
Alright since everything you have is "but its fun lolz" I'll throw an actual argument in here.
Imo C4s in general restrict the gameplay a lot, you're supposed to listen for a tiny beep in a game that has a broken sound system, chances being that the beeping gets completely blocked by a wall for some reason. OR you can rely on other people for information, but for most of the players on the server communicating like that is actually pretty rare. Usually you just see a "c4" in the text chat. Gee, how helpful.
I don't think gameplay like "hide an object (preferably in a spot that's unreachable by innocents), wait 45 seconds without doing anything, repeat" is good gameplay.
Now all this just gets amplified by the mass C4 spammers. It's an unfair playstyle that encourages camping, and I think it should definitely be limited.

waiting to see other arguments than "but broo its fun lmao!" or "but I PERSONALLY dont camp in t rooms planting 8 c4s per t round so it CANT be a problem!"

3rd Color of the Rainbow

People who can't aim downvoted this suggestion... I wonder why

Banned
VIP
Legacy
-1 C4s don't have a very big range on this server compared to other servers I've played on and they're honestly used as a meme more than anything, which I think adds to the fun of TTT since it gets pretty repetitive. They don't really take away from gameplay even when they get spammed in my experience. (My credentials include being able to aim, cool guy, everyone loves me)
"Unimaginably dystopian mindset this poster child of depression Christ almighty. This is why I wanna get into animation. To show how wrong morons like these are" -Unknown​

VIP
Legacy
There's way too many c4 spammers out there, limiting the c4s to 2-4 per traitor encourages them to play more creatively imo, I've won 1v8s by simply biding my time, knowing when to take kills and making use of the plethora of other tools traitors have, c4s are nice for flushing out campers or dispersing crowds, but they shouldn't be a crutch weapon. +1
Tenures:
#DarkOrder 18-06-21 to 21-07-21 (Demoted)

VIP+
Nah it makes the game more funny and that is what it is about, right?

Aidan said:
Nah it makes the game more funny and that is what it is about, right?
Click to expand...

Antiant said:
yeah its really funny when the traitors win for the 3490824th time because everyone mass spammed c4
Click to expand...

idk about you bro but i find it fucking hilarious when i get insta killed out of nowhere by a t that's been hiding in the t room for the past four minutes.

shit has me fuckin rollin everytime

Titan said:
idk about you bro but i find it fucking hilarious when i get insta killed out of nowhere by a t that's been hiding in the t room for the past four minutes.

shit has me fuckin rollin everytime
Click to expand...