VIP
Legacy
Your IGN
Pizza Demi-God​
Your SteamID
76561198152648846​
Reported Person's IGN
Prozakk​
Reported Person's SteamID
76561198007867343​
Explain the situation
I joined the server while the map was Life the Roof. It was my T round so I threw 2 of the explosive barrels that are down the stairs near the elevator. I threw them from the middle of the stairs so that my body wasn't visible and nobody could see me throw them. A few seconds after I threw the 2nd barrel a player walks up and looks down from the top of the stairs and sees me standing on the walkway to the door that's above the very bottom room. He shoots the rest of the explosive barrels that are underneath me and kills me without the server crediting it. That ended the round so I reported him and asked if he saw me throw them or assumed, he replied that he didn't see but I was the only person down there. Prozakk handled the report and said the guy had "common sense" to kill me, that it was a justified kill, and that I was the one there. I told Prozakk that 1. He admitted he didn't see me throw the barrels or commit a T act and 2. He never passed the top of the stairs so he definitely didn't check the 2 rooms that are down there and COULD NOT know for sure I was the only one down there. I know 100 times a day people get slain for rdming because they acted without enough evidence or proof. I've been slain many times for killing based on an assumption, which the killer admitted he did. Alot of the time you can't kill somebody even if YOU KNOW it's them because you didn't exactly see them do a bad thing and sometimes the rules just don't allow for common sense and I get that. I've never once received the help from a mod that I had "common sense" to kill someone if I didn't see them do a T thing and if I wasn't sure it was somebody else. There are 2 whole rooms down there and the mod sides that my killer knew it was me just by me standing there. This could've been much easier than this lmao Overall I know this isn't gonna do shit but honestly the was he handled it made little sense and I hope other mods somewhat agree. I just hope he handles everybody's report accurately and doesn't ruin other patrons gaming sessions. I love playing here. Put a frowny face in his progress report. I pm'd him the info again to clarify, I asked if he was gonna fix his findings but nah, guess I have to do this. Have a great day​

Lead Administrator
VIP
Legacy
Tagging @Prozakk and their admin @AaWolly to look this over.

Prestigious
VIP
Legacy
Posting Irrelevant Information in Appeals/Reports
I didn't read, but he is guilty, lock him up boys

Moderator
VIP
Legacy
Letting you know I have seen this, and I'm gathering my evidence.

Moderator
VIP
Legacy
I didn't record the incident, I had believed I did, but I did not. So I will have to describe to you the report, and how I handled it.

The report:
"Did you see me throw the explosive barrel, or did you just assume I did?" (not word for word)

The response:
"I didn't see you throw them, but you were the only one down there." (again, not word for word)


I came to my conclusion because of the response saying "you were the only one down there."
Although, I could have been wrong. You are right when you mention the "2 rooms that are down there," he couldn't have known if you came out of one of the rooms, unaware of what was happening, or that you were the t.

I did ask the lead admin that was on at the time, titan to review the report, but the ds couldn't load for them. (Said helix meant titan)

I do apologize if I mishandled your report. I used common sense, I thought it fit, but it likely did not.
Last edited: May 9, 2022


[EDIT]
Just going to throw this in here, pretty handy that both of these rules are next to each other 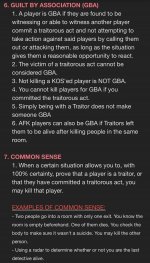 VIP
Legacy
Oh I thought mods could just rewatch rounds during the map that's being played. Park that's like so lame but also if he wasn't sure what was going on down there, before he walked over and looked down the stairs, I could've been in or coming out of one of the 2 room while the other guy (if there was one) was throwing them lmao technically. Sorry yall Didn't know you didn't actually see the scene

Prozakk said:
I did ask the lead admin that was on at the time, helix to review the report, but the ds couldn't load for them.
Click to expand...

to clarify, 'twas me that was on the server, not helix. but the rest of the statement is correct. it was the last round, and i was not able to get the RDM manager to work with me before the map change.

Pizza Demi-God said:
Oh I thought mods could just rewatch rounds during the map that's being played.
Click to expand...

mods can see up to a ten-second rough recreation of the events prior to a player's death. that's what the deathscenes are.

Pizza Demi-God said:
I could've been in or coming out of one of the 2 room while the other guy (if there was one) was throwing them lmao technically.
Click to expand...

This is important to note. The common sense situation of "two people in one room, both are guilty for the traitorous action" only works because there is no chance for one of those two people to commit a traitorous act without the other person seeing it. This doesn't apply if there's a clear partition, like a seperate smaller room, such as the one in lifetheroof. I'm not the one handling the report, so I'll leave it there. I just wanted to clarify a couple things.

VIP
Legacy
Please do not post irrelevant info in reports
I know this is irrelevant and probably going to be removed but Prozakk has a clear history of being toxic and killing people when he knows he can technically justify it, but clearly *shouldn't* kill them.

Halen said:
I know this is irrelevant and probably going to be removed but Prozakk has a clear history of being toxic and killing people when he knows he can technically justify it, but clearly *shouldn't* kill them.
Click to expand...

1. I am going to lock this thread and
2. This is a report on Prozakk handling a report, not him RDMing Pizza

So after careful consideration of how this report should be handled, I have came to the conclusion to mark this report Valid, The only reason why I am marking this report valid is due to the fact that the staff member in question was not recording, nor took screenshots of the report. This will be a learning opportunity for @Prozakk as he has only been a staff member for 3 days now.

Also, for future reference, please utilize an Admin+ if they are on the server at the time of these instances.

This is going to be a refresher for ALL staff to make sure they record while staffing the server.
If you have any questions, Please feel free to reach out to me through discord at AaWolly#6429