Your IGN
toxic447​
Your SteamID
STEAM_0:1:64932530​
Server
TTT Modded​
Why you should be unbanned
i was ban in my t round i kill an inno and got ban for mass rdm , i wait for a record that helix was watching and he say it was gonna be only a slay and not a ban (im talking a report)​

VIP
Legacy
@helix is the one that banned you please be patient for him to respond.

I am a bit confused about the unban reason as we've already discussed it a bit and you know that it was not over the one round. Conversation is below:

I'll expand on this tomorrow evening when I get some time to collect everything.

VIP
Legacy
I will be adding to this after my mod post his evidence.

VIP
Legacy
Get ready for some 280p OBS screenshots. If you squint really really hard you can read them, but it's all here. For the sake of time, and due to the high number of RDMs, I'm only posting the report/short logs, however if you'd like to see any of the death scenes/round recordings feel free to let me know. As far as I'm aware though, there was no dispute for the RDMs but rather there is a dispute for how you reached a ban.

RDM #1: You threw a discombob and killed voca at the start of the round. 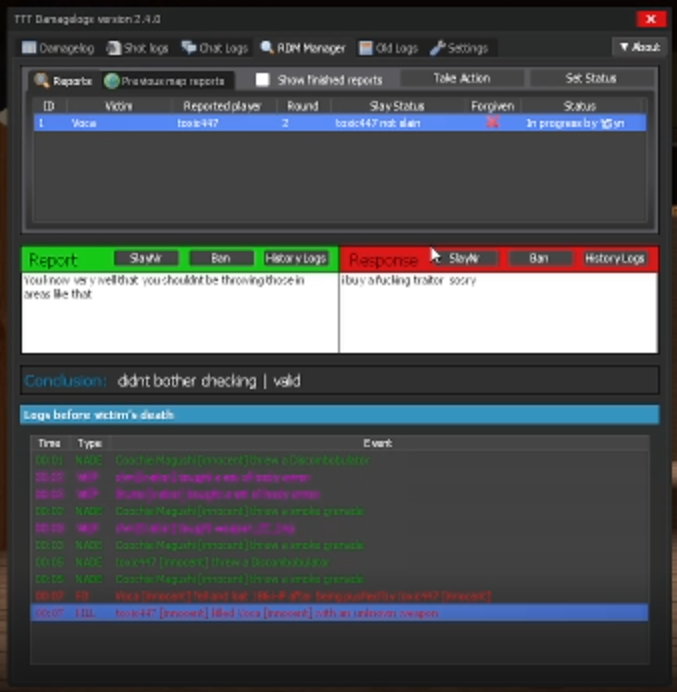 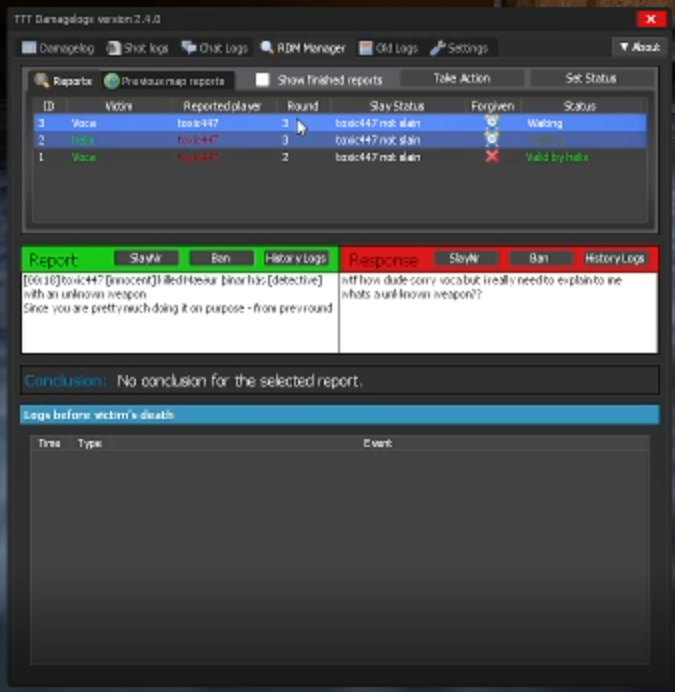 You also yeeted this dude off with another discombob in the same round.

RDM #3:
After just getting in trouble for this, you discombobed me and killed me the next round. Voca handled this one so I don't have an image of the exact report but here are...
The logs: 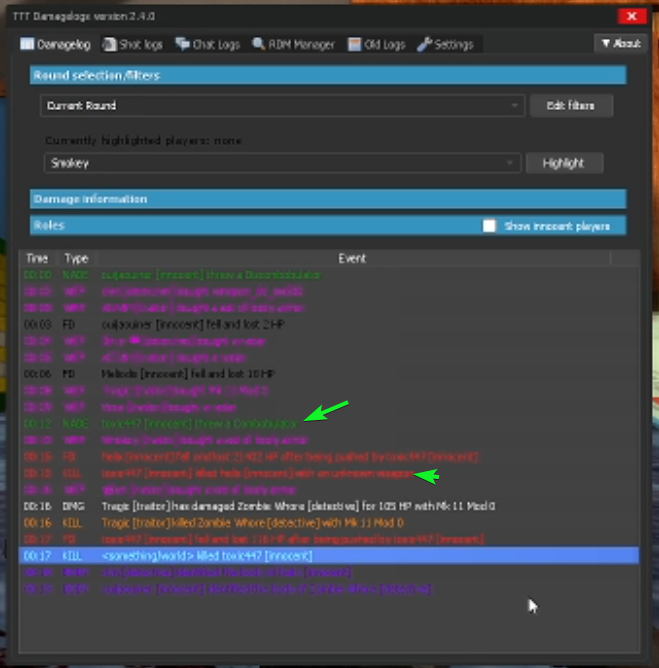 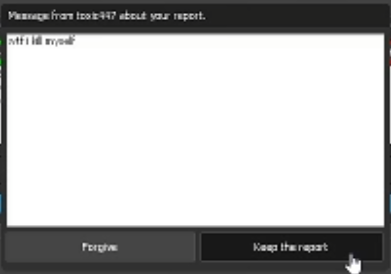 RDM #4 - you prop killed Majestic for no reason and told him to end his life. He forgave you, forgiven RDMs are still considered for Mass RDM bans: 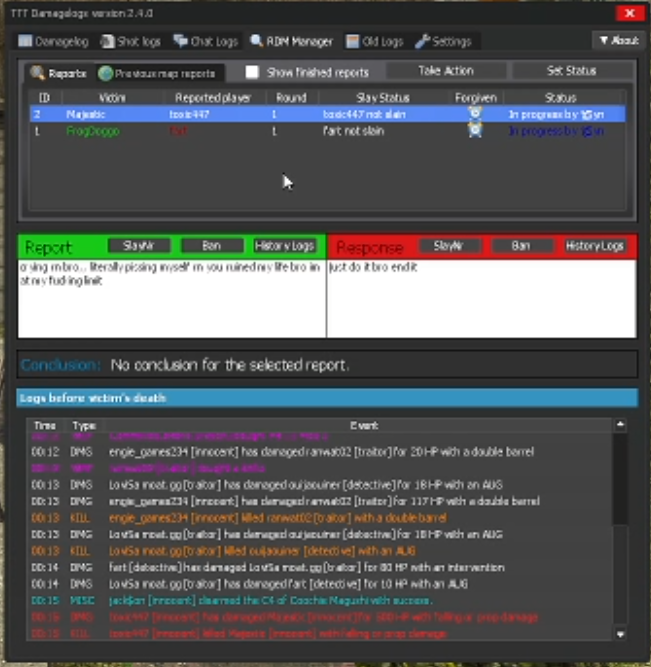 RDM #5 - You pulled DNA from a traitor and killed the innocent for it. Note, this was forgiven however forgiven RDMs are still considered for mass RDM bans: 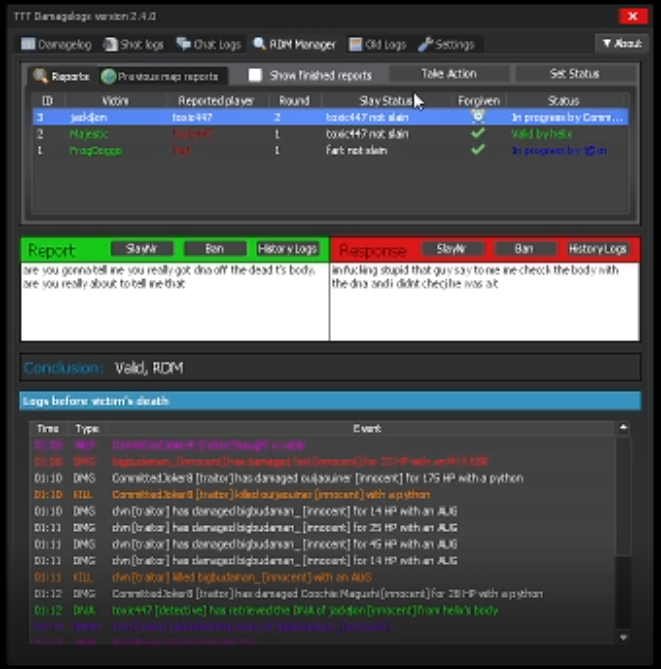 RDM #6 - you swung a trash can at me and did a good amount of damage at the start of the round: 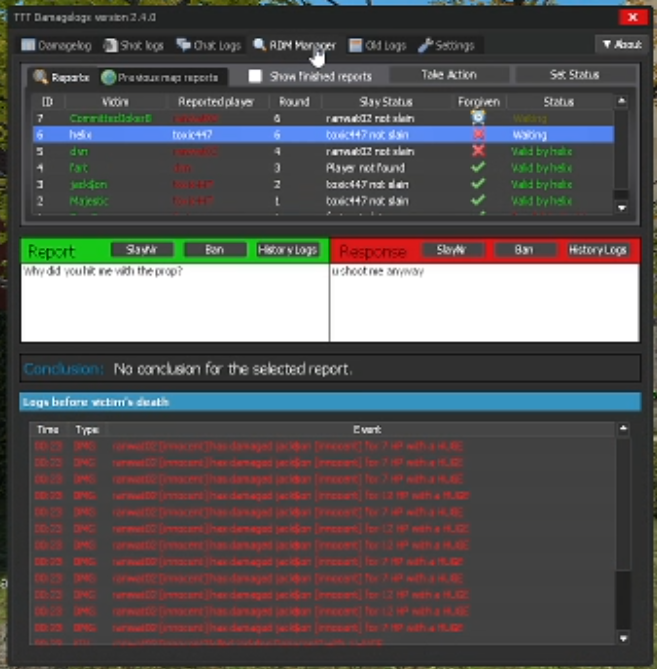 You then left to make sausages. Were they good?

RDM #7 - you didn't throw this barrel, but you did shoot it killing RFCOIL: 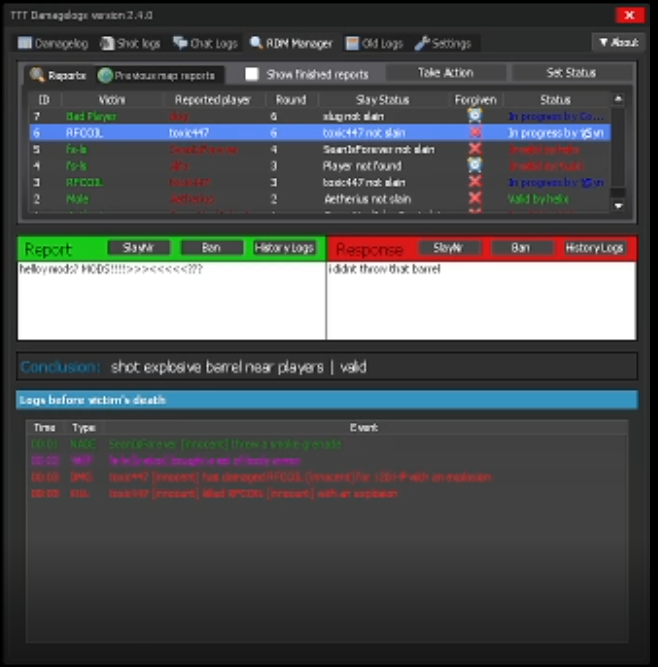 And finally, RDM #8. After review of the round recording we determined that there was indeed no KOS on RFCOIL - 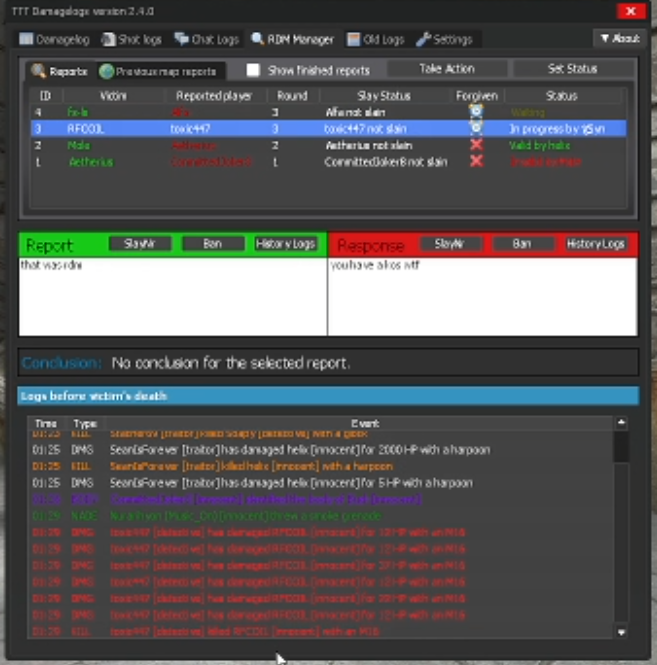 Now, for mass RDM bans we have a certain number of rounds where RDM "expires" and no longer count towards a mass RDM ban. After discussing with staff, it was determined that you had a history of accumulating a large amount of RDMs but never seem to hit this threshold. This has been going on for over a month. Based on this history, I used my discretion as a Senior Mod to go ahead and issue a ban despite making it past this cool-down period. The number of RDMs you accumulated over our time period last night was unacceptable.

For my portion of the report, your appeal is denied. I'll let @The Muffinman add to this and conclude with his contribution to your ban. I trust that he will discuss more on the history.

VIP
Legacy
So now it is my turn to add to this appeal. First off I would like to address that your ban has been extended to 2 weeks for loopholing the mass rdm ban system, you are well aware of the rules and every time you go to 3 rdms then chill for a few maps then do another 3 so you never get banned. In the 2 months you have been with us on our server you have had 45 slays in only 37 hours of play time.

With that being said this appeal will be Denied, If you have any further questions feel free to reach out to me on Discord dudl3y#8150.